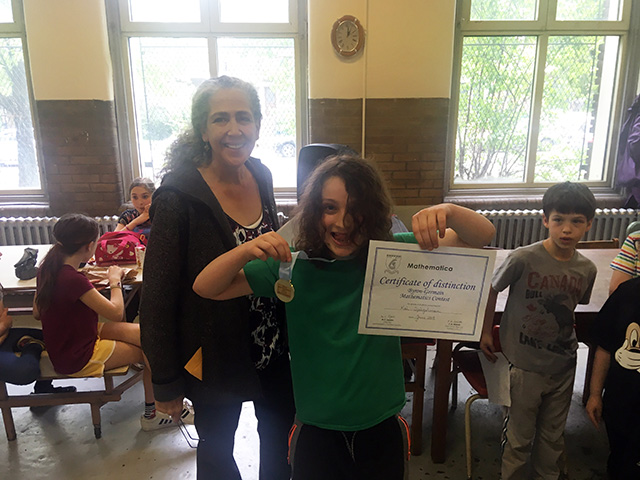 MONTREAL,  JUNE 21, 2019- “He just gets it.” This is how the mother of Willingdon Elementary School student Kai Spiegelman is said to explain her son’s aptitude for math. This plus his love for computing, “solving stuff” and his commitment to “trying really hard,” according to vice principal Steve Spetsieris, may be why this grade 3 student scored a perfect score in a national mathematics competition, Mathematica Centrum.

After writing the test in April, Spiegelman went over his answers with retired Willingdon teacher Gail Issenman, who runs the program at the school as a volunteer. She had a strong feeling that he got a perfect score. They had the long wait until June when the Mathematics Contest Centre announced that Spiegelman got every single one of the 30 mathematical problems correct. He joined the honour roll for the Byron–Germain contest, with 25 other students across Canada in pool of 11,000. He was one of three students in Quebec to claim this achievement.

At Willingdon since the beginning of elementary school, Spiegelman first started competing in the Byron–Germain contest, a grade-4 level test of math, last year when he was in grade 2. That year, he scored highest at the school.

“It’s a very rare event,” said Mr. Spetsieris, who explained that competition math is not as popular in Quebec as it in Ontario or British Columbia. “And he did it.”

These are non-curricular mathematical problems arrived at using logic, Mr. Spetsieris said, where a calculator is not needed. Contestants prepare for the competition for two months. “We format the club to be non-competitive and for pure enjoyment. We recruit people based on whether they enjoy math, not whether they’re good at it,” he said.

Willingdon ranked 80th out of 457 participating schools, according to the Mathematica website. “Most of our students received a certificate of distinction,” said Mr. Spetsieris, which means they placed in the top 25 percent of students who wrote the test. This year, the school competed at the grade 4 level (Byron-Germain) and the grade 5 level (Fibonacci).

The Mathematica Centrum competition has been running since 1990 and takes place yearly in April.

Gail Issenman celebrates with Grade 3 Willingdon student Kai Spiegelman on receiving his certificate of distinction for scoring a perfect score in the national Mathematica Centrum competition.