What’s going on in EMSB schools during Black History Month 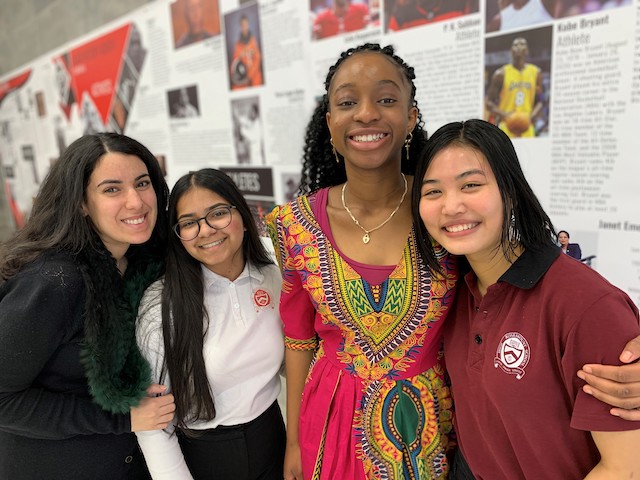 With Black History Month underway, the English Montreal School Board (EMSB) is raising awareness in engaging and creative ways. 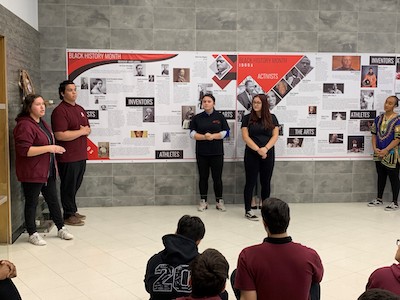 Rosemount High School has created its very first Black History Month Museum. This interactive and portable museum allows students to examine the history and contributions of the black community. It includes music, videos, access to the EMSB virtual library, and looks at the importance of the civil rights movement, highlighting activists such as Rosa Parks and Dr. Martin Luther King.

Secondary IV and V students will be trained as official museum guides and will help facilitate tours of the museum for groups of students. The official launch of the museum was February 18 in the school’s Spiritual Community Centre. 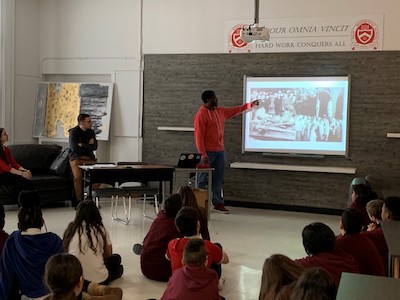 The program was initiated by Special Education Technician Jason Joseph, teachers Jessica Awadalla and Philipe Henriques, teachers; and Spiritual and Community Animator Vince Lacroce. “Celebrating Black History Month allows us to pause, raise awareness and celebrate the stories of inspiring individuals who have forever changed the way we look at our world,” says Mr. Lacroce. “Our message is quite simple: to eliminate racism, to educate and, most importantly, to inspire every student to follow their dreams.” 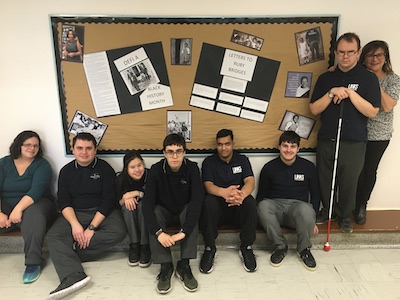 At LINKS High School in Ahuntsic, Gail Bernstein’s students in the DÉFIS program are focusing on the part of the curriculum that integrates social awareness by learning what is going on around them - locally and globally. As students integrate into the community socially and vocationally, they benefit by being able to involve themselves in the daily conversations and dialogue of their peers, families and co-workers.

For Black History Month, they studied prominent African American figures. They shared their stories in class and interpreted some famous quotes. One particular story resonated with the class – the story of the inspiring life of African American, Ruby Bridges. The famous Rockwell painting “The Problem We All Live With” elicited many emotions among the students, Ms. Bernstein said. It depicts the then six-year-old Bridges escorted by US law enforcement agents on her way to William Frantz Elementary School, an all-white public school during the New Orleans school desegregation crisis in November 1960.

LINKS students decided to write her story in their own words and present it to others in a presentation called “A Brave Little Girl: The Story of Ruby Bridges” and also participated in a letter-writing activity, “Letters to Ruby.” “We also challenged ourselves to writing letters to Ruby as students learning about her today, as well as if we were in her life during that historical time,” explained Ms. Bernstein. 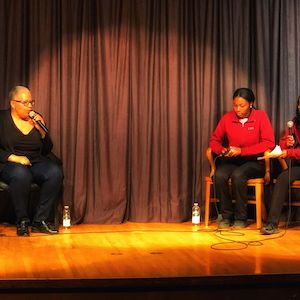 LaurenHill Academy’s senior campus in St. Laurent had a special treat February 11 when Juno award-winning singer and actor Kim Richardson performed for students in the school’s auditorium. Ms. Richardson, who has won three Juno Awards, was there to celebrate the school’s opening of Black History Month and convey a message of positivity to the students.

“Don’t ever doubt your potential of impact,” she told them. “There are always going to be struggles and obstacles in the way, and I’m living proof that you can push through, and that you can achieve your goals and realize your dreams.”

Besides singing three songs, Ms. Richardson took questions from the students. She said while she is very proud of her awards, in the end they’re “just something to dust.” She insisted that the passion has to come from within. “It’s not about the awards. We have to know within ourselves that we’re doing what’s right and what feels good, and what’s going to push us to the next level.”

The show was organized by Physical Education teacher Julia King. “She's a phenomenal role model for the students to look up to, and she has great messages,” she said.

This was among many activities the school has planned to celebrate the month. Others include “Taste of the Islands Lunch,” a Black Theatre Workshop play, Coronation Steel Pan Band and the Mandela Challenge with Bon Courage.

How other EMSB high schools are marking BHM

A special lunch at John F. Kennedy High School in St. Michel on February 14 consisted of jerk chicken, beans and rice, cornbread and vegetables. On the tables in the cafeteria were runners with information regarding black history and food. Students could then go online to answer questions and get a chance to win a gift card to the movies, explained Samantha Smith, SCA. A school-wide assembly is being planned to watch the Coronation Steel Pan band. In between songs, students will learn about Marie-Joseph Angélique, Mary Ann Shadd and Viola Desmond.

At Westmount High School, several teacher-led Black History Month programs and activities are taking place, including special screenings of films, including Black Panther; guest speakers, assemblies as well as informative workshops. One theme is “Come and share your dreams about humanity” and a lunch-time discussion, “Hair Talk.”

At James Lyng High School in St. Henri, “the students and staff believe knowledge is power,” says vice principal Marilyn Ramlakhan. During Black History Month, the school body has been participating in highlighting key influential figures who have made their mark on human history. An A to Z “Legends Are Forever” wall of remarkable people in the black community has been created, and students presented other key figures on Instagram with descriptions and videos. Overture with the Arts visited the school and enlightened students about Canadian Black History; SAIL program students learned how to make macaroni pie; an after-school program (I-Effect) brought in young black entrepreneurs and professionals to lead discussion groups about working hard to achieve goals. The highlight of the month so far was vice principal Ramlakhan’s very own Black Month History Trivia!

What spiritual animators have planned in the elementary schools

"The range of SCA-led activities in honor of Black History Month serves to highlight the numerous contributions of people of African descent in various realms by celebrating black literature, art, music, food, innovation, and customs that have helped shaped the culture of Canada and the world, above and beyond what is incorporated into curriculum year round," explained Danika Swanson, Spiritual and Community Animation Services Consultant for the EMSB. "While it is important to address racial realities in developmentally appropriate ways, it is also important to show students that black people throughout history have always had full human experiences beyond enslavement. These programs align with the work we do year round, helping students learn more about the diverse communities in which we live, and focusing on virtues such as creativity, joy, resilience, courage, kindness, and justice. We hope these programs are enjoyable, educational, and empowering for all students.”

At Sinclair Laird Elementary School on February 18, Achlaie Ernest and Kenneth Wallace, gospel singers and conga drummers performed "A Musical Venture into Black History.” The students had a brief Swahili lesson, accompanied by some dance-movement fun and an introduction to cherished community values (such as responsibility, unity, resourcefulness) that have historically helped transcend oppression. “It was an informative, dynamic and exhilarating session full of beats and stomping footwork!” said Spiritual Animator, Puynung Choy.

At Dunrae Gardens Elementary School in TMR, students were treated to “Rise Above,” which focussed on famous black people in Canada and the US. It was performed by three actors, a beatboxer and jazz singer.

On February 19, Dunrae Gardens Elementary School in TMR received an exhilarating and interactive musical/dance story-telling performance from Gospel singers Kenneth Wallace and Achlaie Ernest. The students learned a number of important pieces of Black History, including slavery, inventions, language, music and dance. By the end, the whole school was dancing and singing in Haitian and African languages, recounted principal Despina Michakis. In addition to the language and music pieces, students learned valuable and inspiring lessons, relating to self-determination and empathy towards others who who have endured centuries of injustices.

From their Spiritual and Community Animator Rocco Speranza, students from Edward Murphy Elementary School and East Hill Elementary School learned about notable people from the black community in both Montreal and Canada at large. Younger students were read to from the book The Colors of Us by Karen Katz.

At Nesbitt Elementary School in Rosemount, the Cycle 1 classes will visit “Heroes and Art Program,” a large banner displaying the images of Black Canadian and Americans from different walks of life. Mr. Lacroce explains that storytelling will take place in the classrooms around the subjects of following your dreams, not judging people by how they look and embracing people’s strengths. Staff and students have been decorating their doors with the people they learn about. Puppet shows were also being planned. Cycles 2 and 3 students will attend a “Follow Your Dreams” assembly and will be treated to a performance by Rosemount High School students of a song students wrote, “I Dream.” The Coronation Steel Pan Band, dancers from Académie de Danse de Montréal will perform an opening dance highlighting a famous black artist. Otis Grant and Christiana Howe are also scheduled to attend as special guests.

Mr. Lacroce, also SCA for Honoré Mercier Elementary School in St. Léonard, says this school will have most of the same program, with a slightly different guest list, and Rosemount High will sing a rendition of “Amazing Grace.”

Spiritual and community animator Linda Luca reported that Coronation Elementary School launched Black History Month with a school-wide assembly with special guests, The Youth Stars and DJ Malik, “who gave us an animated assembly filled with Caribbean and African music.” The senior grades at Merton Elementary School and Willingdon Elementary School were to have the same performance later on. Coronation’s very own steel pan band, led by teacher Fatima Wilson, also played a medley of music. Classrooms presentations in these schools during the month of February were dedicated to black history, led by Ms. Luca, who is also SCA at Marymount Academy International in NDG. She created visual displays relating to black history to spark discussion. 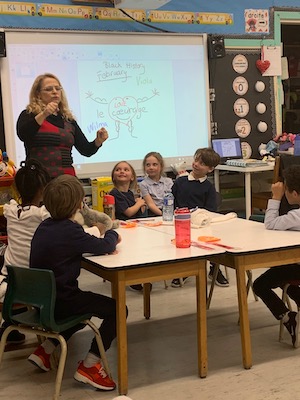 SCA for Elizabeth Ballantyne School in Montreal West and Roslyn in Westmount, Gladys Batten, explained her plan to engage students in hour-long class presentations with a focus on Canadians Viola Desmond, and John and Mildred Ware; and Americans Wilma Rudolph, Booker T. Washington, Frederick Douglass, Rosa Parks and Dr. Martin Luther King. They explored the themes of courage, constancy, inclusion, social justice, human rights and more. Classroom storytelling used legendary examples of courageous responses to injustice, where the oppressed used self-respect and creativity. Drama and fun were used in a game that had students decipher “real love” from “fake love.”

In Kindergarten, students acted out a skit involving Wilma Rudolph and her family, and in Cycle 1, Ms. Batten told the story of Alberta legend, John Ware and his wife Mildred and their family. In Cycle 2, an activity involving a “decision chain” stretching across the class, is made by the students helping them to identify eight significant “choices towards life” (e.g. growth, progress, hope) made by Booker T. Washington from a biography that begins when he is a child. Cycle 3 students heard the story of Frederick Douglass’ childhood and discussed issues of hierarchy and social justice. A video on wolf pack behaviour was used to lead a discussion around bullying and how that contrasts with the ability of humans to make decisions that can make a more inclusive community.

At Edinburgh Elementary School  in Montreal West and Westmount Park Elementary School, Cycle 3 classes are invited to Black History Month presentations led by their Spiritual Community Animator Jagdeep Trehin. The focus and theme for this year is courage, with an emphasis on the inspirational story of a Canadian woman from Nova Scotia, Viola Desmond. “Viola’s story is one that has many lessons for our students today,” said Ms. Trehin. “And what our students find even more remarkable is that her journey still continues today.” 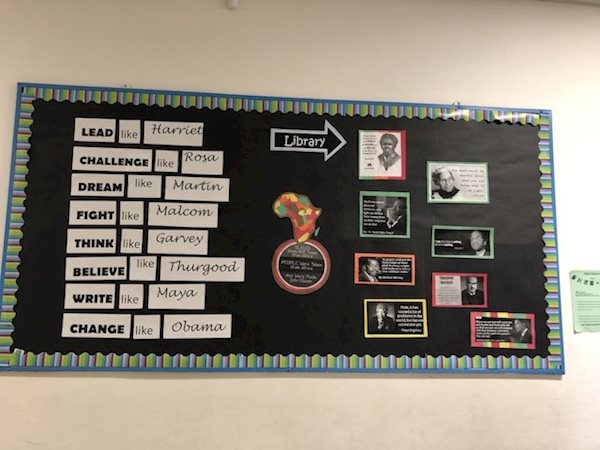 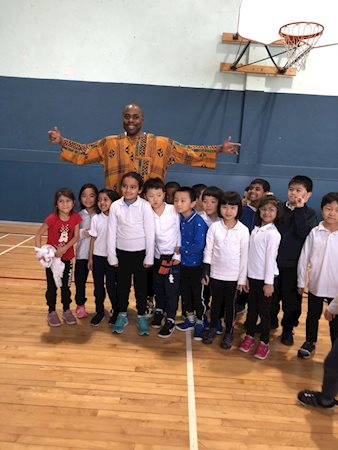 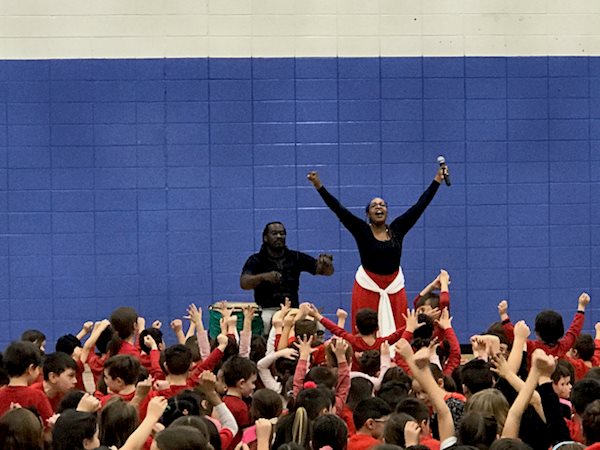 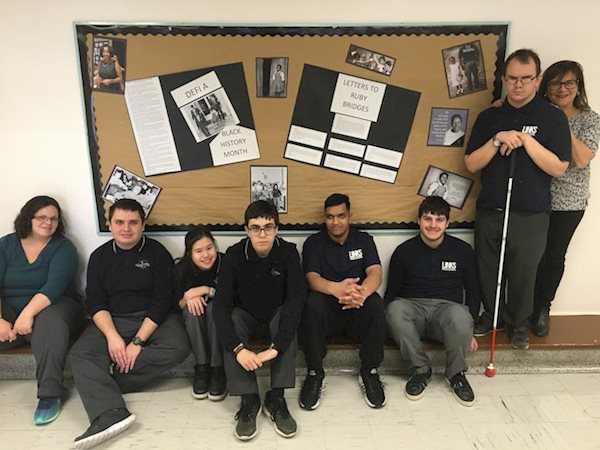 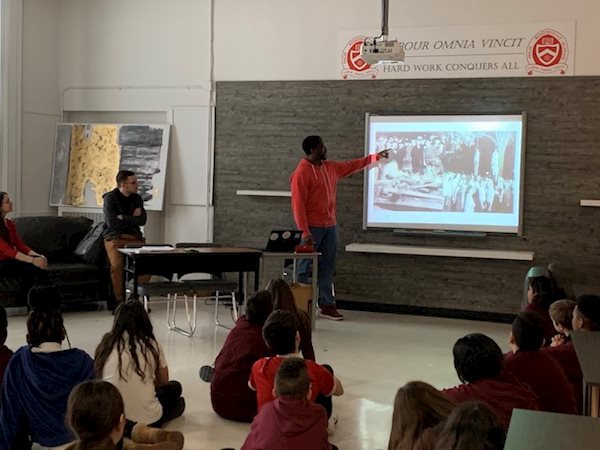 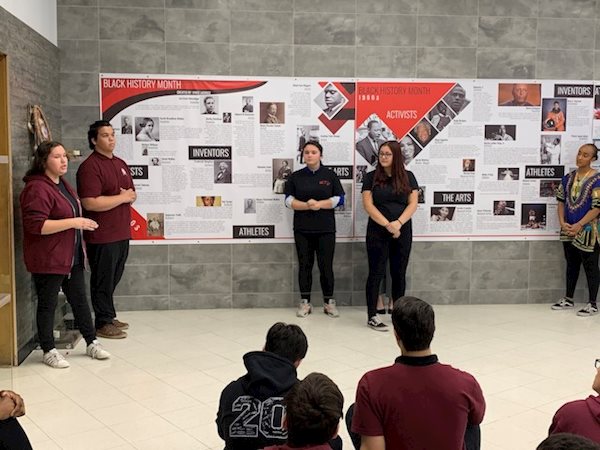 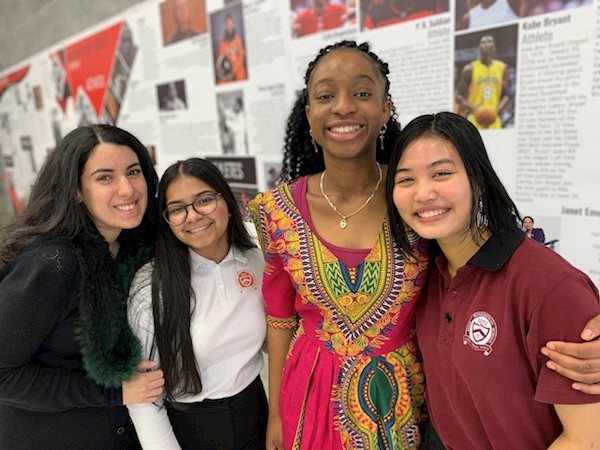 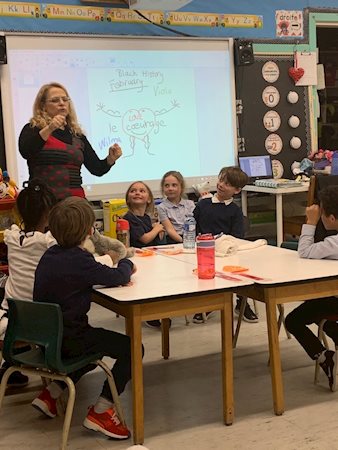 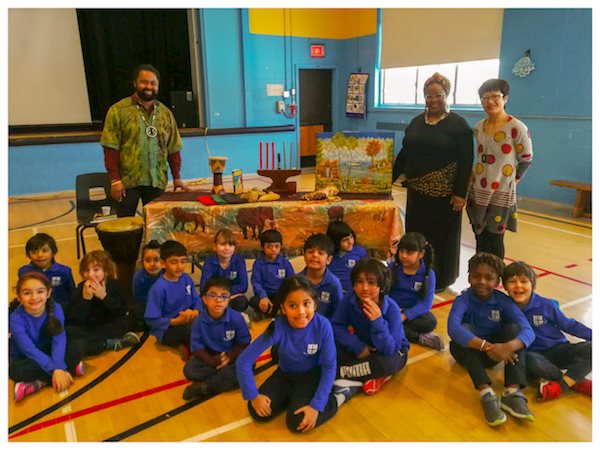 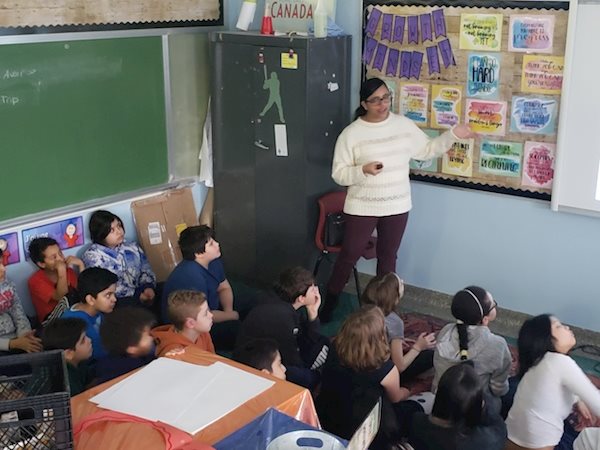 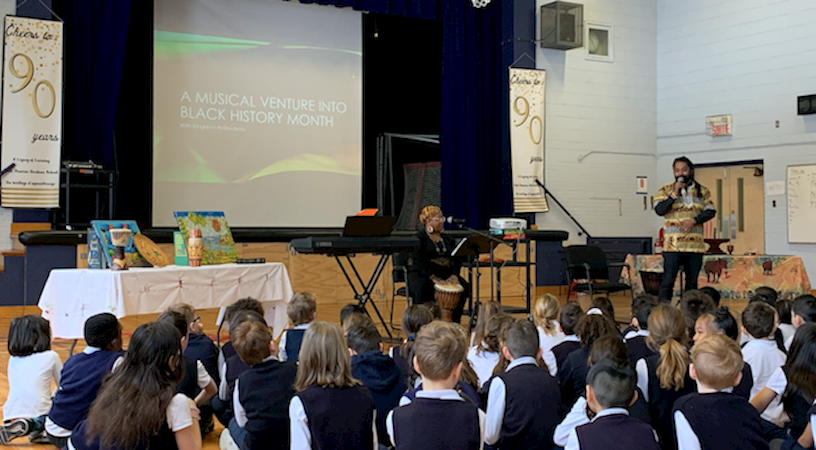 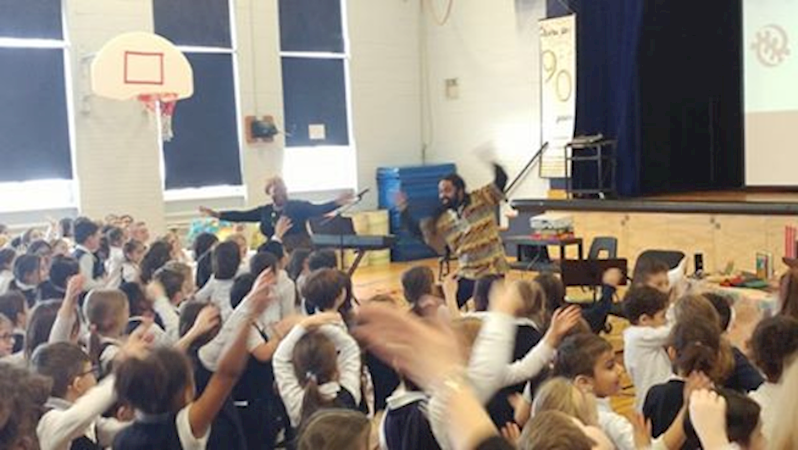 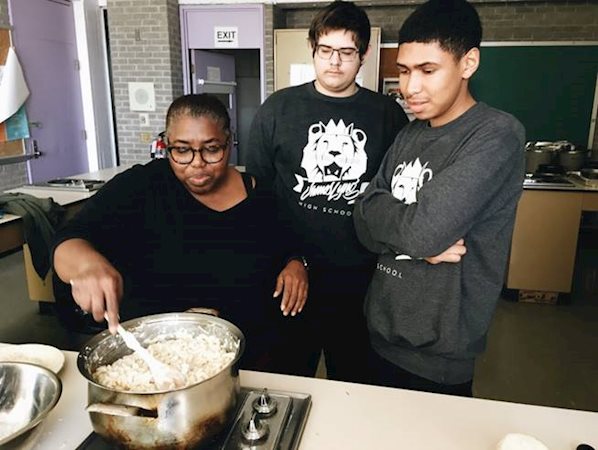 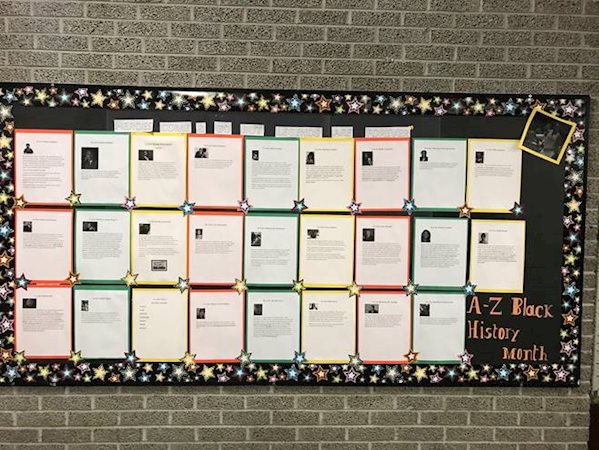