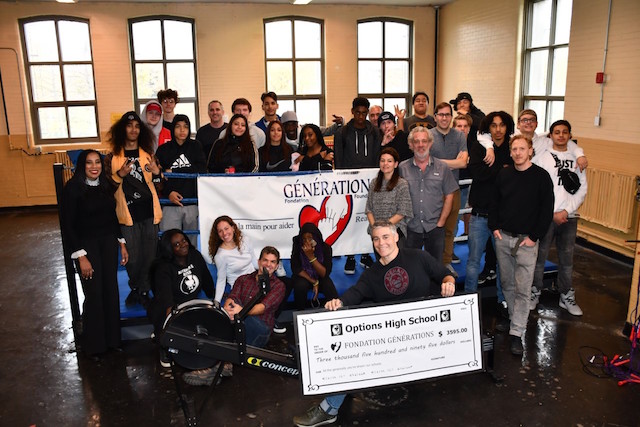 Students and staff  from Options Alternative High School  in Ville Émard  joined forces in their gym to give back to the Generations Foundation, an organization that has supported them immensely throughout the years. To show their appreciation for the cause, students and staff took part in a 24-hour stationary Row-A- Thon, which began on October 17 at 12:30 pm and concluded on October 18 at 12:30 pm.

Originally, students and staff were divided into three teams of eight with the expectation of rowing in 22-minute shifts. However, as the event proceeded, participants increased support for the students and their goal of raising $1, 000. Options alumni, friends and family of the participants, as well as the Alternative Outreach Network Principal Craig Olenik, took turns on the stationary rowing machines. Together, they were able to reach their goal of ensuring that all three  machines did not pause for the entirety of the event and surpassed their goal of $1,000. On October 25, a week following the event, Options   has raised $3,595 via direct donations and their “Go Fund Me” page.

Jason Gannon, a staff member at Options, was the organizer and motivator of the event and instilled the motto “All Go, No Quit” in the minds of the students and staff. His goal was to prove to participants and outsiders that Options is capable of uniting for a cause and to reciprocate the support that has been given to them by the Generations Foundation.

The students and staff at Options would like to thank all of their supporters during the event and hopes the Row-a-Thon will become an annual token of appreciation to the Generations Foundation. They also hope to have motivated the students and staff in surrounding schools to give back to the causes that they believe in.

Here is a link to their Go Fund Me page