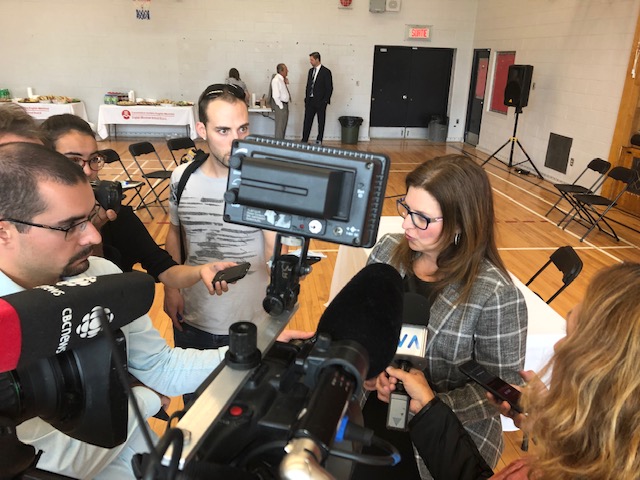 The English Montreal School Board held a press conference on September 10 to announce court action against the Quebec government.

The EMSB Council of Commissioners has adopted this resolution to take the necessary measures so that the Courts can pronounce themselves on the forced transfer of EMSB schools to the Commission scolaire de la Pointe-de-l’Ile; the constitutionality of Section. 477.1.1 of the Education Act; and the protection of school board governance under Section 23 of the Canadian Charter of Rights and Freedoms.

The press conference can be viewed at  www.facebook.com/EnglishMTL.

Here are some CTV clips: http://ctv.news/OLMcznP

Here are the remarks by EMSB Chair  Angela Mancini from the press conference:

I would like to begin welcoming you all here today on behalf of the English Montreal School Board’s Council of Commissioners.

The last few months, have been quite hectic at the EMSB.  The end of June and beginning of July was highly charged in particular, by the circumstances by which two English schools:  John Paul 1 and General Vanier, were transferred by the CAQ government from the EMSB to the French school board of Pointe-de-l’Ile.

Today, the Council has invited you here to hear our thoughts on the subject of our schools having been transferred to the French board, and to share with you our plans for the near future.

In June, the EMSB filed a Judicial Review in Quebec Superior Court and asked the Judge to impose a ‘stay of execution’ / injunction until the court could rule on the merits of the case - before the two schools would be transferred.  While the judge stated that our case had merit, she was reluctant to not move forward with the transfers, in part because there was little time to prepare for the next school year.  Nonetheless, the merit of the EMSB Judicial Review request is still before the court.

Today, our lawyers have filed another case in court to determine if section 477 of the Quebec Education Act respects the minority rights of English citizens of Quebec.

The EMSB is concerned that similar school transfers will keep happening in the years to come. For these reasons the EMSB is bringing a constitutional challenge before the Quebec Superior Court in order to obtain a clear declaration on the government’s obligation to  1) consult the English-speaking community and 2) show respect towards the decisions and proposals in the context of school transfers.

The EMSB Council also passed a resolution last week, asking the Legault government to seek a reference at the Quebec Court of Appeal on whether recent and imminent actions respect the minority rights of English Quebecers and guaranteed under section 23 of the Canadian Charter.

Reference cases allow governments to obtain an advisory opinion from a court without a live procedure between two opposing litigants.

Specifically, the EMSB wishes to obtain a clear answer from the courts on whether school board governance is constitutionally protected for the Quebec English minority.

Over the past 20 years, there have been a number of very significant federal and provincial reference questions answered by the courts. For example Eligibility to Supreme Court of Canada in 2014,  fixed Terms of Federal Senators in 2013 and others.

A reference case before the Quebec Court of Appeal would save considerable resources on behalf of the government and the EMSB and would provide insight, from an objective authority, on whether or not the government’s proposed plan to abolish school boards is consistent with section 23 of the Charter.

While hopeful that Mr. Legault and the CAQ government will take all precautions before tabling legislation that may be in violation of the rights of the English minority of Quebec, in the event that the government does not seek such a reference, the EMSB is committed to going to Court to obtain a clear answer on whether the abolition of English school boards is constitutional.

Section 23 of the Charter confers on representatives of the English-speaking minority of Quebec the exclusive authority to make decisions relating to the minority language instruction and facilities. The EMSB is prepared to go to Court to defend this right.

The English community has a right to manage and control its educational system. Yet very soon, the CAQ government will table a bill to abolish school boards and replace them with service centres.  The new bill will likely propose that, unless you have children currently enrolled in the public English school system, you will have no right to vote nor to present yourself for election – thus limiting the majority of the large majority English rights’ holders and tax-payers.

The EMSB has always stood up to the government in order to ensure the rights of its community: whether the PQ and their Charter of Values, or the Liberals and their Bill 86 and now the CAQ for Bill 21 and the abolition of school boards.  All of this, while achieving the highest certification rate (at 91 percent) for public schools in the province of Quebec.  First and foremost, the EMSB remains focused on student success.  And the results speak for themselves.

But the English Montreal School Board also represents the parents and the English speaking taxpayers – who come out to vote in school board election in significantly higher numbers than they do elsewhere in the province.  Why?  Because school boards and the multi-faceted role that they play in and for the English community of Montreal is extremely important to our minority community.

The English Montreal School Board is announcing today that it has filed in court to determine if section 477 of the Quebec Education Act respects the minority rights of English Quebecers;

The EMSB invites Mr. Legault and the CAQ government to submit some reference questions to the court and to wait until those questions are answered before tabling a bill to abolish English school boards;

The EMSB is announcing its willingness to launch further court action against the Quebec government on behalf of the English citizens of Montreal;

The EMSB is inviting other English school boards and organizations to join them in this important cause.

Thank you for your interest and attention.

Sep 15, 2020
Virtual Open Houses usher in new era at EMSB
With the COVID-19 pandemic ushering in a host of changes in...
Read More