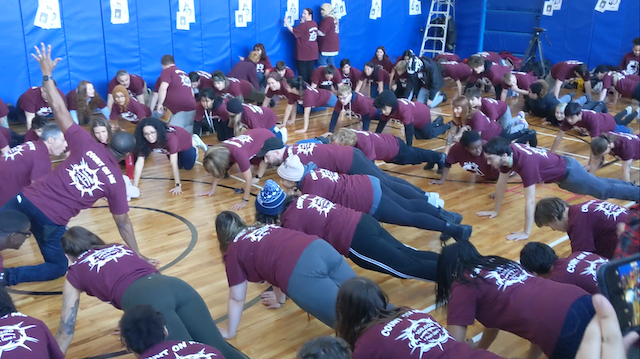 On Friday February 14, the students and staff in the EMSB’s Outreach Network united in the Options  Alternative High School gymnasium to complete a two week-long initiative  known as “Push-Up for Ellie.” It was created to support  seven year-old cancer fighter Ellie White and her family as they recover from a $1,000,000 (US) experimental treatment received in Columbus, Ohio. Following the treatment, which ended in great success, the Outreach Network wanted to offer their support to Ellie and the White family as they continue to recuperate financially and emotionally.

Initially, the Outreach Network pledged to complete 100,000 push-ups to show their support to the White family, and to promote the “Fight for Ellie” GoFundMe page via the social media hashtag “#pushupforellie.”  As the network gathered on Valentine’s Day to complete the final push-ups together, the 10 alternative schools were pleasantly surprised to learn that they surpassed their goal of 100,000 push-ups, by 11,047. This left them with a grand total of 111,047 push-ups.

Their support through the form of push-ups was symbolic to the idea that they wanted Ellie to feel empowered and uplifted following her cancer-fighting treatment. Furthermore, although the Outreach Network cannot take full credit for the donations made to Ellie’s public GoFundMe page surrounding their initiative, the “Fight for Ellie” donation page saw an increase of around $5,000, and the network’s students and staff are honoured to be a part of such efforts.

Ruth Rosenfield, a close friend to the White family, was present during the Valentine’s Day event, where she spoke on behalf of the family. The students and staff were delighted to hear that on that exact date, February, 14,  2020, Ellie was released from her recovery in the Sainte-Justine Hospital, allowing her to go home, which to her, meant everything.

The Outreach Network hopes that the completion of the 111,047 push-ups was only the beginning of the Push-Up for Ellie movement, and that others in the community will continue to show their support through the “#pushupforellie” hashtag. Other groups in the Montreal community, such as the staff and children of a local Montreal daycare partook in the push-up initiative and were able to raise $700 dollars to be donated to the “Fight for Ellie” GoFundMe page. If you would like to join the movement or show your support to the White family, we welcome you to do so through the “#pushupforellie” hashtag on Instagram, or by visiting her GoFundMe page: https://ca.gofundme.com/f/fightforellie